At Mount Soma, not only are there magnificent views, but you have the basics of a healthy setting: fresh air, pure water, and silence. The water is tasty, clear, and mineral-rich. Clean and refreshing mountain air makes it a joy to breathe. The silence can be deafening. Stroll to the different parks or explore the hiking trails and discover fantastic rock formations or the sublime beauty surrounding mountain springs. 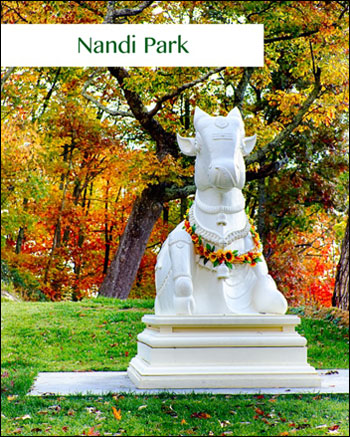 Nandi is the pure white bull who is the gatekeeper and clears the way for Shiva. He is Shiva’s vehicle and the primary follower of Shiva. A dedicated servant of Shiva, he is the embodiment of single-minded devotion, strength, and protection. He is also the embodiment of dharma.

A 14′ 9″ statue of Sri Hanuman, in solid black granite, has been installed at Mount Soma. After five days of powerful Vedic ceremonies from May 29 through June 2, 2014, the installation of Sri Hanuman is complete. The presence of Hanuman enhances the already powerful effect of Sri Somesvara Temple and Mount Soma, and provides health, power, and blessings to all. 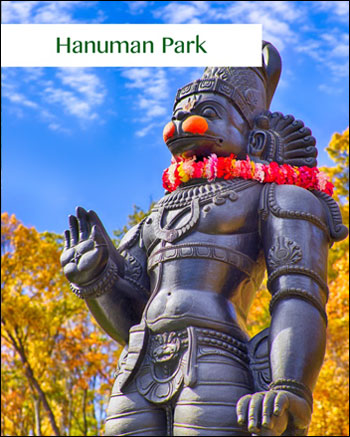 Hanuman is an incarnation of Rudra. His father was a king, Kesar, and mother, Anjana Devi. With the help of Vayu Dev (wind god), Anjana blessed her child as Hanuman. An ardent devotee of Rama, he was a central character in the Ramayana.

Sri Hanuman teaches us about the unlimited power that lies unused within each one of us. Hanuman directed all his energies towards the worship of Lord Rama. His undying devotion made him such that he became free from all physical fatigue. Hanuman’s only desire was to go on serving Rama. Hanuman perfectly exemplifies dasyabhava, devotion that bonds the Master and the servant. His greatness lies in his complete mergence with his Lord.

Those contributing to Hanuman, the protector of Mount Soma (kshethra palaka), will get relief from karmic planetary effects, especially Saturn. Anyone who wishes to profoundly experience the blessings of Sri Hanuman is welcome to contribute to the Hanuman Park development. We would like to complete the park landscaping by the end of the year. 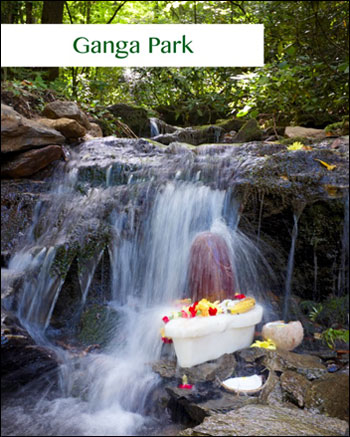 Two Shiva Lingas have been installed and inaugurated just under the two waterfalls at Ganga (Maynor) Creek.

The Linga is a symbol of the formless universal Consciousness of Lord Shiva. It also represents the potential unmanifest elements of the relative world. The Yoni, upon which the Linga sits, is a symbol of Shakthi and represents manifest universal energy. From the unmanifest comes the manifest energy, through which all things are created. The Yoni and the Linga symbolize the communion of eternal Consciousness and dynamic power of Shakthi, the source of all actions and changes, the creative power in the universe. They symbolize the unity of life and supreme energy.

Lord Shiva is often worshiped by pouring Ganges water over the Linga to represent the Ganges descending from heaven onto Shiva’s head. Swiftly moving water of the Ganges is considered especially purifying and the embodiment of all sacred waters.